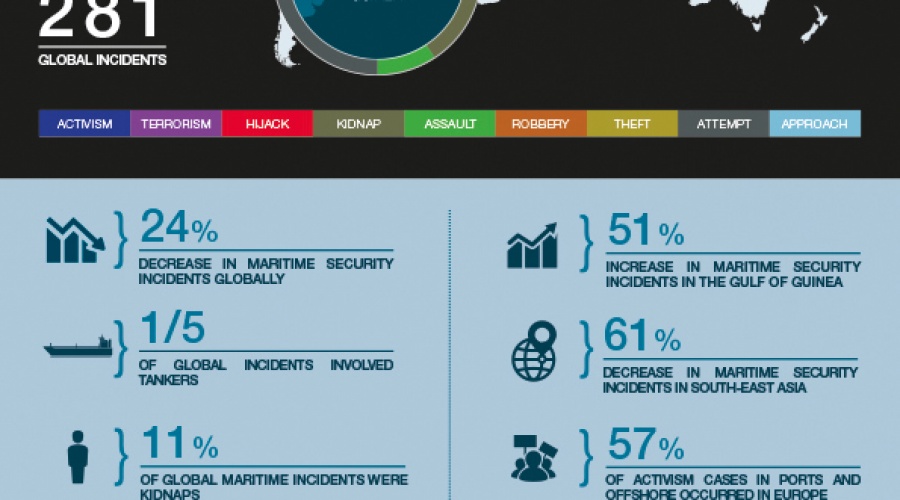 Maritime security incidents on a global level declined by 24 percent in the first six months of 2016, compared with the same period in 2015, according to Control Risks, a global risk consultancy.

This decrease has been driven by a 61 percent decline in cases in South-East Asia, where incidents of piracy and armed robbery have reached their lowest point since 2009.

In addition, very low levels of criminal activity continue across the Horn of Africa and South Africa and Central America also saw a decline. This has contributed further to the decrease in overall maritime security incidents worldwide, Control Risks said.

96 percent of all maritime security incidents globally were related to piracy and armed robbery, showing that this threat in particular continues to be a key concern in all regions except Europe, where there were no recorded incidents.

In European ports and waters, cases of maritime activism were the number one operational risk, contributing to 57 percent of all incidents globally.

On the other hand, the Gulf of Guinea and Nigerian waters experienced the highest levels of maritime security incidents since before 2008, with high numbers of abductions and attacks continuing across these areas.

“This shift in some of the key regions illustrates how quickly patterns of maritime crime can change. In Asia we have seen an unprecedented decrease in attacks on commercial vessels, driven by enhanced security patrols and a crackdown on crime syndicates onshore,” Sebastian Villyn, a maritime consultant at Control Risks, said.

“However, we have also recorded an increase in maritime abductions in the Sulu and Celebes Seas, in the western Pacific Ocean south of the Philippines. This is a worrying trend, but does not detract from the overall decrease in security incidents in Asia.”